This is a Nearpost Local special edition – an extended discussion with the CEO Capital Football, Heather Reid. Heather is still the only female CEO of a member Federation within the FFA. Heather Reid is also the CEO of Canberra United. 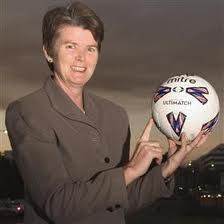 Heather has only recently returned from Europe, where she attended the Womens World Cup, represented the CEO of the FFA at the FIFA women’s football symposium and recruited a new Head Coach for Canberra United. 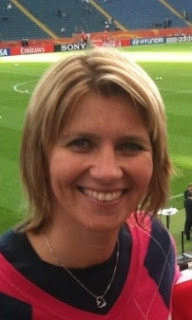 Photo above is of the new Canberra United coach.
Heather talks about the standard of Football across the nations in the World Cup and the issues discussed at the FIFA symposium. A very interesting football discussion and some candid observations about the Matilda’s performance.
And this is just the start of this discussion with the CEO Capital Football.

We cover a lot of ground and it’s all about things that impact on Football in the ACT region.

The matters we discuss evidence some decent forward planning at Capital Football and I must say, in the nick of time. Nothing is ever completely resolved in the biggest particpation sport in the ACT region, but we are beginning to see some important progress, good ideas, some fortuitious opportunites emerging, and a healthy dose of pragmatism.

Now the challenge is to bring the Clubs along and before things too far ahead at Football House. This appears to be happening for some for the issues, but its essential that conversations and analysis at Football House (Board, Standing Advisory committees and staff) translate into substantive engagement and support across all Clubs  at the earliest possible time. There is always the temptation to serve up a one solution option as effective consultation. Supporting documents which underpin discussion need to get published on the Capital Football and Club websites as soon as possible. Good communication and time for consultation is essential. This takes time at Club level.

Here’s a starting list of some of things that get honorable mentions in this discussion:

• The Canberra United roster – fascinating and not yet finished!

• The financial management of Canberra United – sponsorship and grants see this "club" just about cost neutral to Capital Football which is good news. This is a big step forward. Something to celebrate! (Its an important first step to detaching Canberra United from Capital Football and perhaps separating the management of both - but that's clearly a little further into the future)

• The review of the Mens Premier League structure – changes to be implemented in 2012. This is likely to involve significant change to the present arrangements.

• The impact of the FFA’s National competition review on football in the ACT – considerable! Can’t wait till it arrives, best to get started.

• Steps being taken to cover the talented Mens 17 to 20 years development pathway. Changes in circumstances at the AIS have given the ACT Football community an extra-ordinary opportunity, which Capital Football looks to have siezed upon (frankly, this is more than we could ever have hoped for and if delivered in full provides exactly the pathway we have all sort for these young players - at a fraction of the cost of a youth league team):

o AIS and ACTAS Mens to form a “Club” for the purpose of participating in the Mens Premier League. Allows for movement of players when required to ensure all games are played when scheduled (except where agreed otherwise)

o AIS to include the Canberra based non residential scholarship holders in the National Youth League squad (so they play in this competition as well! Amazing opportunity.)

• Some good progress on the future development of artificial playing surfaces (note I use the plural!) in the Mawson / Phillip area (and not the former golf course range - though that too must not be lost to medium density housing developers - hope this has not been traded off by anyone in football!). This one might just happen.

• Futsal registrations going gangbusters – North and South Canberra, the astonishing Boomerangs FS who are now a part of the NSW Premier League and the start of a local junior Premier League based on Football Club involvement (at last we have tapped the right organisational structure to support Futsal).

Look there is plenty more, so best you get a restorative drink, headphones on or speakers turned up, door closed, feet up and listen in.

Welcome to the Nearpost Local, where too much Football or Futsal is never likely to be enough! I'm Peter Funnell.
Each week I comment on and present interviews on football or futsal matters which have meaning for us in the ACT region.

Comment as you see fit, but one rule - no personal attacks. We will always respect the game!

2xxfm is a big part of the Football Family and you can catch other Football programs on 2xxfm:
- Nearpost (a National focus program) on Tuesday, 6:30pm
- Farpost ( they cover Football around the world / locally), including some live broadcasts of games in the ACT, on Sunday, 3:00pm

The NPL is broadcast on the Canberrra community radio station 2xxfm, on 98.3, Wednesday mornings at 9:00AM.
A Podcast of the program is availalble the following day on this site. Just download the program and listen in your own time.

Go to the bottom of the page for selected video content from people with something to say!